Attention all llama and alpaca owners, supporters and friends--

March 01, 2019
Here's an opportunity for public comment that will help the llama/alpaca industry. 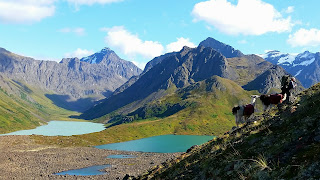 The Alaska Bureau of Land Management (BLM) is proposing a draft Resource Management Plan (RMP) for future public land management actions in in a region known as the Bering Sea Western Interior (BSWI) Resource Management Area. (There are several BLM-RMA’s in Alaska and BSWI is just one of them.) The RMP for this region bans the use of camelids (llamas and alpacas) in sheep habitat due to a perceived disease threat.

BLM’s proposal to restrict use of camelids (llamas and alpacas) due to a perceived "health risk" to wild sheep is unscientifically founded and unjustly stigmatizes camelids. If BLM proceeds with this proposed policy of banning camelids in Alaska based on a disease threat, it could have far reaching implications for all public lands in Alaska as well as those in the lower 48 states. It is important to note that BLM’s position on this issue is not shared by other public agencies, notably the Alaska Department of Fish and Game (ADF&G) who manages the wildlife resources in this BLM jurisdiction. Please help curtail the “domino effect” of inappropriate rule-making in Alaska that could spread to other public land jurisdictions throughout the United States by making a comment to BLM.

There is currently an open public comment period for the BSWI-RMP and a comment to BLM can be made anytime until the close of the public comment period on June 13, 2019.  Here's a suggested comment. "I request that BLM remove the word “alpacas” and the word “llamas” from 2.7.5 Wildlife #3 (on page 2-25). Rationale: Alpacas and llamas (camelids) are not “similar species” because they reside in very different taxonomic classifications as compared to goats and sheep. Furthermore, there is no scientific evidence that alpacas and llamas pose a health risk to wild sheep. Per the June 11, 2018 letter from the Alaska Department of Fish and Game (ADF&G) to the Greater Appalachian Llama and Alpaca Association (GALA), ADF&G does not restrict the use of camelids and states “we have no intentions to promote or support limiting the use of South American camelids on public land in the State of Alaska” and ADF&G “has no plans to change or focus our disease surveillance efforts related to camelids.” For more information and to see a copy of the ADF&G letter go to www.packllamas.org

Comments can be submitted to BLM using one of the following methods below.

Thank you for your support!