September 15, 2019
Pack llamas have historically played an important role on our public lands, whether they are used to pack equipment for trail maintenance or to haul out human waste as they do in Rocky Mountain National Park. However, over the years there have been scientifically unfounded proposals made by government agencies to ban llamas from our public lands.


History of Llama Bans in Alaska (Past and Current)
In January 2015 a ban on domesticated sheep, goats, alpacas and llamas in Alaska’s national parks was proposed in a National Park Service (NPS) compendium. After a public comment period ended in February 2015, domesticated sheep and goats were banned, but the pack camelids (llamas and alpacas) were still allowed in Alaska’s national parks with written permission from Alaska’s park superintendents and a current health certificate.  Pack Llamas Get OK After Proposed Ban in Alaska National Parks.

Chugach National Forest (CNF) is currently attempting to ban pack llamas for commercial use based on a perceived "disease threat" to wild sheep and goats. CNF "short circuited" the NEPA process by providing no public notice to eliminate commercial use of pack llamas when their Draft Chugach National Forest Land Management Plan was open for public comment in 2018. The verbiage to ban llamas was added into the Final Chugach National Forest Land Management Plan (CNFLMP) after the public comment period was closed which effectively eliminated comment by the pack llama user group. Since CNF's ban identifies pack llamas as a disease threat, this opens the door to eliminate them for all uses (including recreational) in the future. The pack llama user group was faced with protesting the final CNF decision – a much more onerous task. The comment period ended on October 29, 2019. There were many positive comments on the llama issue and thanks to all who took time to contribute! We are waiting to see the outcome and I will post an update on this blog as soon as I know what decision CNF makes.

Pack Llamas on Alaska's Public Land
The Alaska Department of Fish and Game (ADF&G) looked at the same Canadian studies (upon which BLM, CNF and NPS based their decisions) and came to a completely different conclusion. As stated in the June 11, 2018 ADF&G Letter - "at this time we have no intention to promote or support limiting the use of South American camelids on public land in the State of Alaska”. This decision was made by ADF&G despite the fact that they supported and helped pay for a camelid disease study (RA) report. The ADF&G letter states “there is no significant information in the RA. After discussing the document internally and with other biologists from several jurisdictions (including the Western Association of Fish and Wildlife Agency Wild Sheep Work Group - WSWG), we will continue to focus and enhance our evaluation of disease risk from species other than llamas or related camelids. There is not enough information presented in this report or other current publications to warrant spending additional resources on this issue.” Furthermore, the ADF&G letter states “we understand that the WSWG pulled the RA report from their website partially due to some concerns about the report itself.” WAFWA is widely recognized among state and federal wildlife agencies as the scientific reference for wildlife disease issues.

Historical Use of Pack Llamas on Public Lands
In contrast, pack llamas have a long history in national parks such as Yellowstone and Rocky Mountain which have sensitive wild sheep and/or goat habitat. Park personnel in Rocky Mountain National Park have been using llamas for packing and trail maintenance for over 30 years. For more on this go to these articles - CleaningToilets Amid 'God's Splendor' (Star Tribune) and Just a Beautiful Day, Gone to Waste (Denver Post).

The Shoshone National Forest Land Management Plan Revision FEIS Volume II states “Pack animals that do not pose disease transference issues including llamas, horses, donkeys, and assistance dogs are not restricted for use by elderly forest visitors.” USDA Forest Service research/technical publication A Process for Finding Management Solutions to the Incompatibility Between Domestic and Bighorn Sheep addresses pack llamas and disease research that is favorable to their use in wild sheep habitat. Therefore the CNFLMP (above) appears to be inconsistent with USDA Forest Service research and policy regarding the “pack llama disease issue” in other Forest Service jurisdictions.

Taxonomic Separation and Disease Epidemiology of Llamas
Facts concerning taxonomic separation and disease epidemiology of llamas are being disregarded by those advocating llama bans. Llamas are from the family Camelidae while wild sheep, domestic sheep, and goats are from the family Bovidae. Their evolutionary pathways diverged beginning 40 million years ago. Consequently, strong species barriers (similar to horses) make llamas extremely unlikely to transmit disease as compared to goats and sheep.

Furthermore, science has shown that llamas are less likely to transmit disease to wildlife than other pack stock such as horses or mules. Ironically these are the very animals that are considered to be the preferred species by federal agencies. However, horses (equine species) are a greater disease risk than llamas as they have a number of endemic disease susceptibilities (equine influenza, equine encephalomyelitis, equine herpesvirus rhinopneumonitis-EHV, Potomac Horse Virus, vesicular stomatitis, strangles, etc.) and are overall less healthy than llamas. Llamas have no identified endemic diseases and are naturally healthy and disease free. Both llamas and horses have been pen-tested with wild sheep and shown to not carry nor transfer the pathogens that are lethal to wild sheep. However, horses are less healthy overall and can carry respiratory infections secondary to their primary endemic infections that could be transferrable to wild animal populations including wild sheep. Additionally, llamas have an exceptionally strong, broad spectrum immunologic system such that their serum is being considered in development of flu vaccines for humans that give a wider spectrum and more enduring protection. (See Antibody Derived From Llamas may Provide Cure for Human Diseases.) All current information and history indicate llamas present less disease threat to wild sheep than horses and humans that develop zoonotic infections (TB, MAP, and CE) which can be transmitted to wild sheep.

Commentary on the History of Perceived “Llama Disease” Threats
The North American llama community comprised of 3000+ llama owners and users represented by the Greater Appalachian Llama & Alpaca Association (GALA), the International Llama Registry (ILR), and the Rocky Mountain Llama Association (RMLA) formed a "watchdog" committee and website to serve as a repository of scientific information about pack llamas and help clear up any misconceptions concerning perceived disease issues. A forty-one (41) page "commentary" on their website www.packllamas.org provides a detailed response to these scientifically unfounded proposals and documents the history of perceived "llama disease threats."

In conclusion, some government agencies are prohibiting pack llamas on Alaska's public lands due to a perceived "disease risk" which is not based on science. The danger is that these Alaskan government agencies may set a precedent that will ultimately be applied on public lands in the lower 48 states. Therefore it's imperative that pack llama owners and anyone who uses our public lands remain vigilant and make their voices heard through the public process. 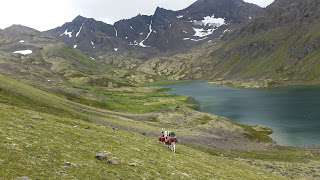 More reading related to this topic at these links-