April 28, 2018
Published in Alaska Outdoor Council (AOC) 2018 Spring Newsletter (Click on link below and go to page 6 for article.)
Pack Animals Denied on BLM Lands in the Eastern Interior RMP
by Phil and Linda Nuechterlein 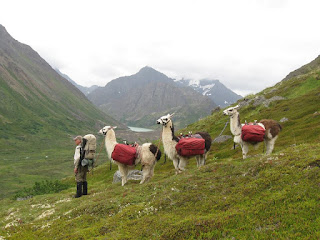 Dr. Gregg P. Adams DVM, MS, PhD professor at the Western College of Veterinary Medicine, University of Saskatchewan stated it succinctly, “Camelids are not new nor exotic to North America - they originated in North America. The diseases listed as a risk posed by llamas are no different than a list that could be made up for any species entering the back country, not least, humans. For example, every mammalian species harbours mycoplasma. Contagious ecthema, chlamydiosis and MAP in camelids are rare - far less than in humans. In any risk assessment, the objective is to determine the probability of an event happening and the consequences of such an event. There is no such thing as zero risk, and a zero-risk policy is not a legitimate argument to “strongly support a precautionary approach”, if for no other reason than this approach is not being applied to all equally.”

The website www.packllamas.org was developed for "Llama Packers" and "Llama Owners" and serves as the most complete repository of research, scientific data, and information related to the scientifically unfounded proposals and current bans of pack llamas on our public lands. On this website there is a detailed response or commentary to these scientifically unfounded proposals. This forty-one (41) page commentary was developed by the North American llama (alpaca) community for the benefit of the many user groups that use our public lands. These user groups include private outdoorsmen, recreationalists, and businesses who hunt, fish, camp, and work on North American public lands and who will be most certainly impacted if these proposals are adopted. A great deal of time and effort went into development of this commentary.  It serves as the most complete and up-to-date paper on the history of perceived "llama disease threats." I wholeheartedly encourage every llama owner and anyone who uses our public lands, to read the commentary carefully.