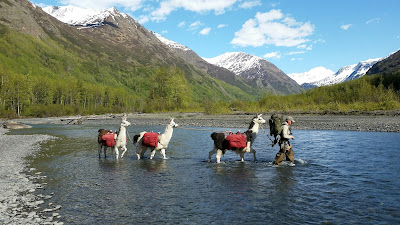 Llamas have been raised in South America for centuries as pack animals. The packing ability of llamas combined with their ease of transport enables them to be utilized in a wide variety of situations and makes them ideal for packing. They are popular with hikers and hunters on longer overnight trips because they can carry most or all of the gear. Your next Colorado trail guide: A 300-pound llama.


Advantages:
There are many advantages to using llamas over other types of pack animals.
FAQ - How much can a llama carry?
The amount of weight which llamas can carry depends upon their age, condition, the terrain and distance to be traveled. Just like people, llamas need to get into shape before going on long hikes with a lot of weight. Younger llamas and llamas packing over more difficult terrain should carry less weight than when traveling on less difficult terrain.
Based on age, llamas can carry a certain percentage of their lean body weight. You should estimate their body condition before determining if the actual weight of the llama is a good estimate of lean body weight. An overweight llama will not be able to safely carry as much weight as one in good body condition. A one year old llama will be about 125 to 200 pounds. A 2-3 year old llama will be about 175 to 300 pounds. An adult llama will be about 225 to 450 pounds if not overweight.

FAQ- How do you transport a llama?
Llamas are easy to transport because they require no specialized equipment. They are smaller than traditional pack stock and lie down once in the transport vehicle. A covered windproof pickup (photo), van, horse or utility trailer all work well. The photo on the right shows llamas being transported in the back of a small pickup truck with an overhead canopy.


FAQ- Are Llamas Used on Pubic Lands?
Llamas are also used to carry equipment and supplies for trail maintenance crews in state and national parks. (See my Sept. 4, 2017 blog - "Llamas Do Heavy Lifting for Chugach State Park Trail Crews".) Click on the links below to see how llamas are being used in Rocky Mountain National Park. You may be surprised!
Cleaning toilets amid "God's Splendor"
Just a beautiful day, gone to waste

In conclusion, those who use llamas are thankful for their quiet companionship and willingness to "do the heavy lifting" without complaining. I like to think of llamas as a "backpack with four legs." People who have packed with llamas will often decide "not do it any other way again."